Buying a soundbar is an excellent solution when you don’t want to spend too much but feel that you need something louder than your TV speakers. For $300 or less, you can get a great-sounding soundbar and considerably improve your listening experience. Today, we are comparing two such soundbars – Denon DHT-S316 and Yamaha YAS 207. 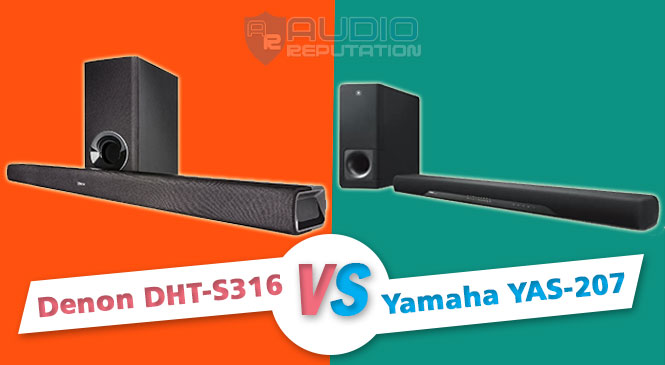 Denon DHT-S316 is a slim budget soundbar with a 2.1 channel configuration. It comes with an external wireless subwoofer and a simple remote. It features one HDMI ARC port and one optical input. It also features Bluetooth connectivity and supports the most common 5.1 surround sound formats.

The unit is priced under $300 and delivers decent performance for the price. Like many similar soundbars, DHT-S316 has several sound modes (DSP modes). The most important modes are three levels of dialog enhancement for improved intelligibility and a ‘’night mode’’ that lowers the bass response and gives you much better balance with clearer vocals at low volumes.

Yamaha YAS-207 is, just like DHT-S316, a budget-friendly soundbar with a 2-channel configuration. It also comes with an external wireless subwoofer and with a simple remote. YAS-207 is a bit more versatile – it has an HDMI ARC OUT port, optical inputs, and an additional HDMI input. The soundbar is Bluetooth-enabled and supports the most common 5.1 surround sound formats (PCM, DD, and DTS 5.1). It also supports DTS Virtual:X.

YAS-207 is similarly priced as DHT-S316 and can also be found for less than $300. It has a greater selection of sound modes than DHT-S316. The most important supported sound modes are Clear Voice, which does the same thing as Denon’s dialog enhancement, and Bass Extension for elevated bass response. YAS-207 delivers very good stereo performance, and it’s particularly great when it comes to midrange reproduction.

Why You Should Buy Denon DHT-S316?

Denon DHT-S316 soundbar is a bit slimmer than the YAS-207 and the subwoofer is significantly smaller, which makes it a better choice for those dealing with space limitations. Both soundbar and subwoofer are significantly lighter.

The unit is very easy to set up and use. The buttons on the soundbar’s top panel are responsive and clearly labeled. The included remote, although cheap-looking, is also very responsive and has an intuitive button layout.

The included subwoofer connects to the soundbar wirelessly, and it does it automatically. The connection is very stable and reliable. 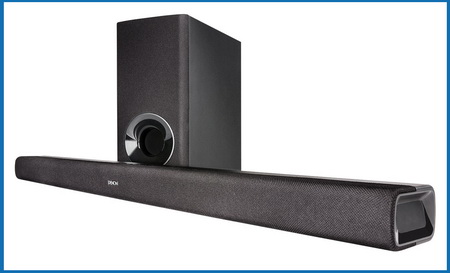 For connecting your TV, you can use the HDMI ARC port (if your TV has an HDMI ARC IN), optical port, or AUX jack. Surround sound is supported only when using HDMI.

DHT-S316 features Bluetooth connectivity for wireless streaming. It works fine within the standard 33ft range (less than 15ft when there’re walls between the source device and soundbar).

The bar has two built-in racetrack-style woofers (1.25″ x 4.4″ each) and two 1″ tweeters. The subwoofer has one 5.5″ bass driver. The drivers inside the bar are arranged in two channels but can simulate surround sound when supplied with PCM 5.1, DD 5.1, or DTS 5.1.

The stereo performance is decent. The sound is fairly balanced, and the midrange reproduction is the best part. The bass is fast and punchy but lacks depth and detail. The soundbar is not very loud, but it’s still a good choice for medium-sized rooms.

Like many Denon’s bars, DHT-S316 features three levels of sound enhancement. The intelligibility is nicely improved, even at high volumes. Also, if you are a fan of late-night movie sessions, you can use the Night mode and avoid waking up your family members.

Why You Should Buy Yamaha YAS-207?

Yamaha YAS-207 is also slim and compact, just not as slim as DHT-S316. Both soundbars have similar designs and are wrapped in a nice acoustic fabric. However, YAS-207 is, at least in our opinion, a better-looking unit. Mostly because of higher-quality fabric, thicker plastic, and because of the lack of shiny details. Again, this is just our opinion.

Unlike DHT-S316, YAS-207 has touch-sensitive controls. They are not as responsive as real buttons, but they do the job. And you also get a remote that looks better and not as cheap as Denon’s remote. YAS-207 soundbar also has a better and more intuitive LED panel.

The setup procedure is a breeze and is done in no time. The subwoofer that comes with the unit is wireless and pairs automatically. We’ve had no problems with the subwoofer – no connection loss or hiccups of any kind.

YAS-207 has an HDMI ARC OUT, optical IN, and AUX IN, just like Denon DHT-S316. But it also has one HDMI IN for connecting one video source.

Aside from physical inputs/outputs, there’s a Bluetooth connection for wireless streaming. Bluetooth doesn’t do anything spectacular – it delivers average sound quality, average range, and average reliability.

The soundbar houses four 1.75″ woofers and two 1″ tweeters. The subwoofer houses one 6.5″ bass driver. The drivers inside the bar are arranged in two channels (two woofers and one tweeter on each side). The system features a 2.1-ch configuration, and just like DHT-S316, it can simulate surround sound. Besides the most common 5.1 surround sound audio formats, it also supports DTS Virtual:X. 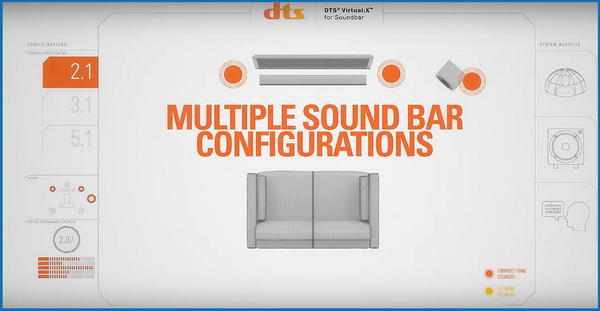 YAS-207 delivers very good stereo performance. The soundstage is wide and deep, and the reproduction is accurate, dynamic, and balanced. There’s a nice amount of bass, but it’s not very deep or rumbling. It lacks those really low sub-bass frequencies. To get more punch, you can engage the Bass Extension or play with the Bass Levels (dedicated Bass controls on the remote).

Besides the Bass Extension, there’re numerous DSP sound modes that you can use for different kinds of audio content. Clear Voice is used for improved dialog clarity, and it really does wonders with midrange reproduction and vocals. Other available sound modes are TV, sports, music, movie, and game surround.

Expectedly, two similarly priced soundbars have a lot of things in common. Their size is similar – they are both designed for smaller to mid-sized rooms. They both feature similar looks, and the soundbars are wrapped in black acoustic fabric.

Both systems come with similar-looking wireless subwoofers and with remotes. They are both equally easy to hook up and use. Also, both soundbars have some basic controls located on the soundbar itself.

None of the two units is crazy versatile, but they both have HDMI ARC OUT ports for connecting TV, as well as additional AUX and optical inputs. And they are both Bluetooth-enabled.

Both soundbars can decode only the most basic 5.1 surround sound audio formats. Other multi-channel formats are not supported.

Finally, both units feature 2.1 configurations. They deliver satisfying stereo performance for the price. Both soundbars feature sound modes for improved dialog clarity, and both of these modes (Dialog Enhancement and Clear Voice) do a very good job.

These two soundbar/subwoofer systems have much more similarities than differences, which is perfectly natural since they are almost priced the same. However, there are some subtle differences that may help you make the choice.

For starters, DHT-S316 is just slightly slimmer and lighter. This could be important if you are dealing with significant space limitations.

YAS-207 is just a little bit more versatile and has one input port more than DHT-S316 (additional HDMI input). That doesn’t seem much, but it can be a life-saver when the number of sources you want to connect is greater than the number of HDMI inputs on your TV.

DHT-S316 has a newer Bluetooth version, but that doesn’t really reflect on the performance. Both soundbars deliver the same kind of connection quality, sound quality, and range.

Both units are categorized as 2.1-ch systems, but YAS-207 has more drivers and has a larger bass driver. YAS-207 delivers a slightly louder sound and has a punchier bass response.

Both systems can decode only 5.1 surround sound, but only YAS-207 supports DTS Virtual:X. This thing is supposed to simulate surround sound and make the sound output more three-dimensional but it doesn’t really do a great job, and it’s not significantly better than a standard stereo sound.

As you’ve seen, there’s not much difference between DHT-S316 and YAS-207, and you won’t regret buying any of these two budget-friendly soundbars. Both have a similar design, they have HDMI ARC outputs, they are Bluetooth-enabled, they both decode 5.1 surround sound, and both have various sound modes (including those designed for improved dialog clarity).

We were just slightly more impressed by the Yamaha’s YAS-207 soundbar. It looks better, the build quality is better, it has one additional HDMI input (more versatile) and, most importantly, it sounds a little bit better and louder than DHT-S316.

DHT-S316 is a better choice if you’re looking for the slimmest and most compact solution or for a soundbar that features Night mode.

So, there you have it. You should now have all the necessary info to make the right choice. If there’s anything else you want to know, leave us a comment, and we will respond promptly.

A: Our recommendation is YAS-207 but it only wins the battle by a slim margin. The truth is – they are very similar in terms of design, features, connections, and performance. YAS-207 just sounds a little bit better and louder, it has a slightly better bass response (deeper and punchier bass) and has one additional HDMI input.

A: To be honest, they both offer very similar performance, and they both do a very good job.

A: Price is just one of many similarities between these two soundbars. Both soundbars are practically priced the same.

A: No, none of these two are Atmos bars. They can only decode 5.1 surround sound.

A: YAS-207 offers just a slightly better movie-watching experience. It is a little bit louder and has a stronger bass response than DHT-S316 (because of a larger bass driver).