The main reason why we decided to write about dynamic and balanced armature drivers is to make people aware of small units hidden inside pretty earbud and headphone enclosures. We have noticed that more and more people make their choices based on a device’s design. Of course, we don’t want to insinuate that those buyers don’t pay any attention to the device’s specs but if they aren’t really familiar with all those abbreviations, numbers and units of measure, they are definitely more comfortable to make their decisions based on the looks and price tags.

Headphones and speakers, as well as all the audio equipment and hearing aids, consist of many small parts that work together to deliver the best possible sound and satisfy their users’ needs. We don’t want to say that the performance quality doesn’t depend on the design, because it partially does, but there are many parts of our devices that are more important and we rarely think about them. The most important parts of each and every pair of earbuds/headphones are their drivers.

Drivers are small speaker units made of magnets, voice coils, and cone-shaped diaphragms with a single task – to convert an electrical signal into sound waves that human ears recognize as sound. Drivers differ depending on the type of headphones, in-ear monitors, hearing aids or speakers, and the sound signature the manufacturers want to get. They can be installed as single drivers, which means that there is only one driver in a single earpiece, or as multiple drivers, which means that they are smaller and there is enough space to install several drivers in a single earpiece.

When it comes to driver size, we have 8-15mm drivers in earbuds or 20-50mm drivers in headphones. Of course, speaker drivers can be significantly larger, which also depends on the speaker’s size and purpose. Regardless of their size and purpose, all drivers have the same working principle. Every sound that enters our ears is actually pressurized air in the form of a sound wave. They are created by vibrations made by every object or living creature on the Earth. All the drivers on the market produce sound thanks to such vibrations and this is what all of them have in common.

What Types of Drivers Are There?

Currently, we have five basic types of drivers on the market and, as you will see, their names correspond to the type of headphones they are installed in. Subsequently, we have dynamic (moving-coil) drivers, balanced armature, planar magnetic, electrostatic, and magnetostriction (bone conduction) drivers. They all have their advantages and disadvantages but let’s now focus on the two most popular types.

Dynamic or moving-coil drivers are definitely the most common and the most popular drivers among both manufacturers and buyers. They are the simplest and cheapest type of drivers. Their work is based on the principles of electromagnetism and magnetism. All the movement responsible for sound production is based on these principles as well. A single dynamic driver consists of a magnet (usually neodymium), voice coil, and a diaphragm. The diaphragm is attached to the voice coil that lays next to the magnet, which makes it magnetic. This is the way the electromagnet is created. When the device is connected to the source of power, the current runs through the coil and creates a magnetic field. As a consequence, the coil is attracted and repelled towards the magnetic field, which means that the coil moves. Since the coil is attached to the diaphragm, the coil movements are passed onto the diaphragm which starts to move/vibrate. While moving, the diaphragm displaces the air and creates sound waves that our ears perceive as sound. The larger the amount of the displaced air, the louder the produced sound.

As you can see, dynamic drivers are quite simple and it is quite easy to understand how they work. They don’t consist of many elements and the manufacturers don’t have to spend a lot of time and material to build them. Subsequently, dynamic drivers are inexpensive and widely popular. Apart from this, dynamic drivers can produce very good sound. They are larger than balanced armature drivers and the manufacturers usually install a single dynamic driver per earpiece. The interesting part is that the single driver is capable of covering the entire frequency range, which leads to detail loss but it also produces a great bass due to the fact that they usually have vents. The vents boost the air movement, which improves the bass response.

Advantages and Disadvantages of Dynamic Drivers

To sum up, dynamic drivers are very affordable, which lowers the price of your earbuds/headphones. They are durable and they don’t require much power to produce a very loud sound. Their sound signature can usually be described as warm with great bass, which makes them very popular among musicians such as drummers and bassists. However, they can be tuned in many ways and some high-end models can deliver an audiophile-grade sound with an amazing balance and clarity.

On the negative side, these drivers can’t deliver very detailed sound and are prone to distortion at higher volumes. Although this is the case only with the cheapest models, we still believe that this is worth mentioning. Also, dynamic drivers can be very large, which increases the device dimensions.

Balanced armature (BA) drivers are less popular and not as common as dynamic drivers but not because they sound worse than dynamic drivers. These drivers are smaller and often found in hearing aids and in-ear monitors. Due to their size, the manufacturers can place several drivers in a single earpiece.

BA drivers are smaller than a coin (source – Knowles)

A single balanced armature driver contains a small armature (arm) placed inside a voice coil and balanced between two magnets. The magnets are there to suspend the coil and determine its movements. The armature is attached to the central part of the diaphragm. When the current passes through the coil, it magnetizes the arm, it starts to vibrate and move from one magnet to another. Due to the changes in the created magnetic field, the arm can actually move up to several thousand times in one second. As the arm is attached to the diaphragm, its vibrations are passed onto the diaphragm, which leads to the creation of sound waves.

Balanced armature drivers are tuned to deliver sound within a specific frequency range. This is achieved by using crossovers to split the incoming signal into several frequency bands, which are then sent to the corresponding drivers. This means that the performance of these drivers is a bit limited in comparison to the dynamic driver’s performance. In addition, these drivers don’t displace any air and subsequently don’t have any vents, which directly affects the production of bass tones. In order to compensate for the lack of bass and thanks to the fact that the driver size allows placing several drivers in a single housing, the manufacturers install several balanced armature drivers along with one dynamic driver.

Balanced armature drivers are very useful because they are smaller than dynamic drivers and this makes them more adequate for installing in smaller devices such as earbuds, in-ear monitors, and hearing aids. Due to their size, more than one driver can be installed in a single earpiece, which adds more detail and clarity to the sound these devices produce. In addition, these drivers are tuned to work at certain frequencies, which contributes to the treble quality and ensures a better frequency response across the whole audible range. 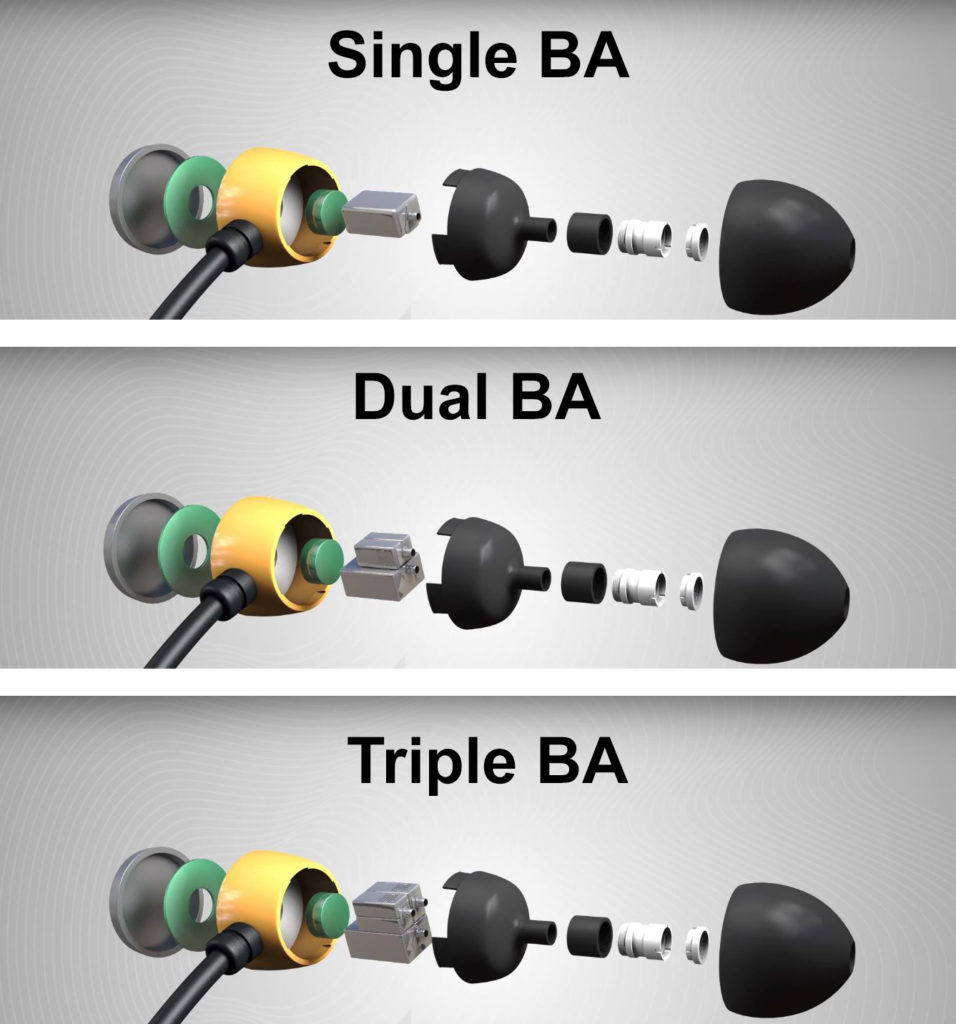 Thanks to their size, you can install multiple BA drivers inside one earpiece

As mentioned before, balanced armature devices don’t have vents, which ensures better noise isolation. They also use less energy to produce loud sounds, which significantly lowers power consumption or battery life, depending on the device type.

On the downside, balanced armature drivers have a more complex structure, which increases their price and, subsequently, the price of headphones. They also have problems with bass production, which means the customers who love bass-heavy music won’t be perfectly happy. That’s why some earbud and IEM manufacturers combine dynamic and BA drivers to make so-called hybrid drivers. In a hybrid driver arrangement, dynamic and BA drivers work in unison to compensate each other’s imperfections and deliver stronger bass and more detailed treble.

To conclude this discussion, we have to say that it’s not so simple to decide which of the two driver types is better. As always, your choice should depend on the type of device you want to buy, as well as its purpose and your needs and preferences.

For example, if you need a pair of affordable headphones with decent sound quality, especially in the bass area, you should definitely choose a pair with dynamic drivers. They are common enough to be found in all kinds of headphones and earphones, regardless of their size. On the other hand, if you need a pair of headphones with an amazing treble reproduction and detailed midrange, or a great pair of in-ear monitors or a hearing aid, we definitely recommend buying a device with BA drivers. You will have to pay more for them but they will eventually pay off.

There is no specific driver feature that makes a certain device sound better; it’s the whole structure and all the driver elements that work together. Dynamic drivers definitely have the best price-quality ratio and that’s what makes them so popular but, if you have enough money to experiment with other driver types, we really don’t see any reason not to try BA drivers (or any other driver type).