After a huge success of the Goldmund Telos 590 NextGen integrated stereo amp and the whole Goldmund Telos NextGen line, this high-end audio equipment manufacturer from Switzerland released the upgraded version of the Telos 590 Nextgen called NextGen II and a more affordable but slightly less capable and less versatile Telos 7 NextGen. In this review, we will discuss all the advantages and disadvantages of Goldmund Telos 7 NextGen and give you our opinion on its overall performance. Is this really one of the most amazing stereo power amps currently made by Goldmund? Let’s find out.

Goldmund was founded in 1978 in France. Two years after, it was acquired by Michel Reverchon and moved to Geneva, Switzerland. Since then, Goldmund has been making high-end turntables, preamps, power amps, speakers (passive and active), DACs, CD transports, and digital processors for home cinemas and surround sound systems. The company is known for its extraordinarily high standards of audio quality. Some of the iconic Goldmund products are Apologue and Epilogue speaker lines, Reference vinyl record turntable, Telos 590 NextGen high-performing integrated power amp, and all the other power amps from the Telos line.

Telos 7 NextGen comes from the same famous Telos line of power amps. It uses the same Goldmund-patented Telos amplification with separate input and output stages, improved linearity, and incredibly low distortion. The amplifier features the latest version of Alize DAC circuits which enables easy coupling with Goldmund preamps. Thanks to its very low output impedance, the amplifier achieves an impressive control over the drivers’ behavior and delivers incredibly pure and transparent audio, without any noticeable distortion.

Telos 7 NextGen features a satisfying number of inputs (USB 2.0 Type B, TOSLINK optical, Coaxial, and RCA analog inputs) but if you want to connect more sources (especially if you want to connect multiple analog sources), you will definitely need a preamp. In spite of its small size, Telos 7 NextGen can push an impressive amount of power (175W per channel) and can drive almost any pair of speakers with ease. And it can do that with amazing authority. The sound delivered through Telos 7 is so transparent and energetic. It’s perfectly natural and lifelike. 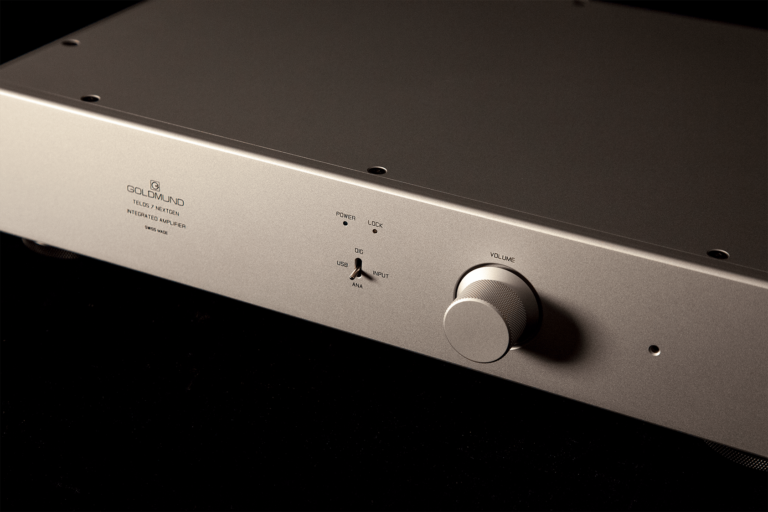 Goldmund Telos 7 NextGen is meant for true audiophiles and audio enthusiasts. Even if you are a hardcore tube lover, you will be amazed by the musicality, realism, and accuracy of this beautiful solid-state amp. Sure, it’s expensive but it’s also worth it. Telos 7 NextGen is one of the best integrated amplifiers in its price range.

Goldmund Telos 7 NextGen comes nicely packed and protected. Along with the amp, you will get a power cable, remote, user manual, and a 3-year warranty. Don’t forget to buy all the necessary connection cables since they don’t come with the unit.

Telos 7 NextGen features quite a minimalistic and somewhat industrial design. It’s surprisingly compact (considering the power output and capabilities) but it’s also very solid and robust. It weighs 22 pounds and its dimensions are 17.3×14.2x3in.

The front panel could not be any simpler – there’s a large dial for digital volume control, one old-school input selector, and two LED indicators (power and lock). 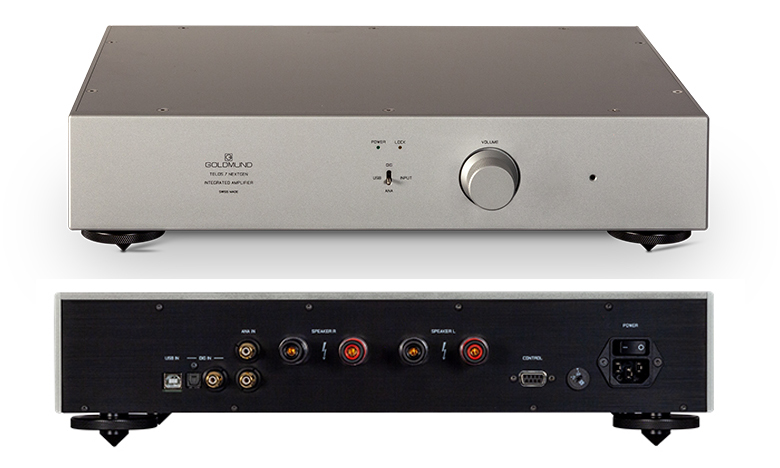 The first thing you’re going to notice, even before you connect all the equipment and start listening, is the simplicity of the user interface. Goldmund truly mastered this kind of approach. Handling the unit is completely hassle-free. Also, the included metal remote is super-simple and allows you to control everything from the comfort of your chair.

The amp has a satisfying number of connections (3 digital + 1 analog). I mean, you won’t be amazed and you’re probably going to need a preamp if you want to connect multiple analog sources but it’s still a great choice if you are trying to make a clean and compact setup.

Even though it’s fairly small, this thing can push 175W continuously into each channel. It is slightly less powerful than its big brother 590 NextGen but still very impressive and more than enough, even for some very demanding floorstanding speakers. Damping factor is maybe not incredibly high (220 @1kHz, 8Ω) but, as you probably know, you can’t really get an idea on how the amplifier sounds just based on the specs. Telos amplification is not about the specs – it’s about the final outcome and sonic performance.

Telos amplification technology has been one of the key factors for such a sophisticated performance of all the Goldmund Telos amps. It’s been meticulously developed and improved over the years (or rather decades). This technology is responsible for improved linearity and reduced distortion of the Telos amps. Thanks to the use of Leonardo time correction, Telos amplification reduces the group delay distortion to a minimum.  The use of the latest Alize DAC circuits improves the resolution and dynamics and allows easy coupling with the Goldmund preamps.

One of the key upgrades in the latest version of the Telos circuits is the so-called ‘’driver control’’. Thanks to incredibly low output impedance, the quality of the control over the drivers, especially over the large woofers, is almost impeccable. You won’t hear any artificial or boomy sounds.

To conclude, Telos amplification boosts the audio signal without introducing any distortion or coloration. It amplifies it with an impressive amount of transparency, precision, dynamism, and purity.

Goldmund Telos 7 NextGen is super-easy to set up and handle. Probably one of the easiest you’ve ever seen. Everything is pretty intuitive. You just need the right sources, right cabling, and a great set of speakers.

In our testing, we’ve used some of our favorite speakers like FOCAL SOPRA No3 and Paradigm Persona 5F. For connecting the sources and speakers to the amp, we’ve used NORDOST Frey 2 interconnects, USB cables, and speaker cables. AURALIC VEGA G2 was used for digital streaming from Macbook running on Roon.

Telos 7 NextGen proved to be a very capable integrated stereo amp and it showed some real character. It drove all those demanding speakers fairly easily. Somehow, it managed to achieve a great level of synergy with both speaker models. It allowed the speakers to show their real potential without introducing any noise or distortion. Telos 7 NextGen just supplied the right amount of power at all times and had an impeccable control over the reproduction. It provided us with such a delicate, refined, and transparent sound. It was a perfect match for both FOCAL SOPRA No3 and Paradigm Persona 5F. It complimented their sonic capabilities and allowed them to shine. Listening to both FOCAL SOPRA No3 and Paradigm Persona 5F towers coupled with Telos 7 NextGen, was pure joy.

Goldmund Telos 7 NextGen didn’t make the sound artificial or too analytical. It just supplied the power, controlled the drivers, and allowed the speakers to express their musicality. It did exactly what a true audiophile-grade integrated stereo amplifier is supposed to do.

Although relatively small and relatively affordable (compared to other high-end stereo amps with similar characteristics), Goldmund Telos 7 NextGen truly is one of the most capable and best-performing integrated amplifiers in its price range. This little thing can drive even the most demanding high-end speakers and it can do that with such authority and ease.

This amazing solid-state amp will win the hearts of all the audiophiles out there, even those who are into tubes. Its sound delivery is musical, realistic, accurate, natural, and perfectly pure, without any noticeable distortion. The performance is simply flawless.

We have nothing but praise for the Goldmund Telos 7 NextGen. It is a unique device and it deserves our honest recommendation.