R2R DACs used to be the only kind of DAC back in the 80s.  They used a ladder network made of a series of precision resistors turned on by the precision switches (current source) to convert a digital signal to analog. After the introduction of Delta-Sigma chips, the majority of manufacturers switched to Delta-Sigma DACs, mostly due to the lower costs of manufacturing and lower power requirements. Today, R2R DACs are produced by a very small number of manufacturers. Some of the most reputable are MSB (US), LessLoss (Lithuania), Lab and Wagner (Russia), Rockna Audio (Romania), and a great company from France called the Totaldac. One of the latest Totaldac’s units is the subject of our today’s review – it’s the Totaldac d1-direct DAC.

D1-direct DAC is meant to be the best-sounding DAC from the d1 Totaldac line. It’s a one-box digital-to-analog converter with a direct output stage from the R2R ladders. D1-direct is based on two Totaldac’s previous products (d1-seven and flagship d1-twelve MK2) but it’s not as versatile as those two and can’t be used with all the preamps and power amps without additional equipment (like the d1-seven) due to the lower output voltage (1.6V) through unbalanced RCA outputs.

The DAC has four digital inputs (RCA, AES-EBU, optical, USB) and supports sampling rates of up to 192kHz (16bit or 24bit). It utilizes R2R technology with 288 pieces of Vishay’s ultra-high-precision 0.01% VAR Bulk Metal Foil resistors. It comes with a separate power supply which is supposed to minimize the noise. It features a custom clock with anti-jitter FIFO memory, it can work in NOS mode (non-oversampling) and it has a direct output stage.

As far as sonic performance is concerned, Totaldac d1-direct leaves nothing to be desired, especially when paired with the d1-driver and a highly capable preamp, power amp, and speakers. D1-direct performs flawlessly and delivers the sound of such amazing purity and transparency. It’s the end-game DAC, especially if you’re into R2R DACs.

When it comes to downsides, there are two important things we want to mention. First, in some cases, your equipment won’t have enough gain for 1.6V output and, if that’s your case, Totaldac recommends partnering it with the d1-driver (amp driver) to get better results. Second, the DAC itself is already quite expensive ($20,000) and if you have to use the d1-driver, it will cost you at least $7,000 more.

In the world of high-end DACs, Totaldac d1-direct is one of the best we have ever had a chance to test. It’s a fairly versatile and incredibly capable R2R DAC offering such a musical performance, transparency, and lifelike sound output. If you are in pursuit of the end-game DAC for your audiophile setup, you should give it a chance. It will blow you away.

The box contains your d1-direct DAC, separate power supply with a power cable, remote control, a very nice-looking Totaldac booklet, and a 2-year warranty. The packaging is simple, the components are packed separately, and all the parts are carefully protected.

Both the main unit and the power supply have a simple but attractive trapezoidal design. The housings have strong aluminum front plates while the rest of the body is made of Plexiglas. You can choose between two versions – the one with black front plate (default) and the optional with a silver front panel. Some users commented that d1-direct (especially the all-black version) looks like something Dart Vader would have in his home as part of his Hi-Fi system and we couldn’t agree more.

All the internal electronic parts are placed on a massive anti-resonance plate made of pure copper.

On the front panel, you will only see a simple OLED display and the Totaldac logo. The display shows the active source, sampling rate, and volume. There are no buttons of any kind or volume dials. For all the adjustments (volume, source selection, turn on/off the filters), you have to use the included remote.

On the back, you have four digital inputs, direct unbalanced RCA output, and power input.

The core of the d1-direct, just like with all the other Totaldac DACs, is the R2R ladder technology. Inside the d1-direct, there are 288 Vishay’s ultra-high-precision 0.01% VAR Bulk Metal Foil resistors. Directly from the R2R ladder goes the unbalanced 1.6V output stage. This is achieved through the use of optimized filtering and new offset management.

In an attempt to reduce the jitter of the source, Totaldac’s founder Vincent Brient built a custom clock inside the d1-direct. Its work is based on the FPGA and internal FIFO memory that prevents jitter.

Furthermore, in order to avoid the use of oversampling but still provide a perfectly flat frequency response without any treble loss (which is a common flaw of non-oversampling DACs), Totaldac used the so-called FIR filter for compensation. The filter kicks in at 3K and corrects the frequency response. You can choose whether you want to use the FIR filter or not (you can also use the DAC in pure NOS mode).

To get the optimum SNR and minimize the noise, the manufacturer opted for a completely separate power supply. All the voltage regulators are also made of discrete circuits.

One interesting thing you will definitely going to notice is the lack of any control buttons on the unit itself. There’s not even a volume wheel. According to the manufacturer, the d1-direct sounded the best with a digital volume control inside the DAC’s FPGA. That was the only way to completely eliminate the noise caused by the volume control components.

The d1-direct is capable of handling 192kHz/16bit and 192kHz/24bit sampling rates through all the digital inputs. Like all the other Totaldac DACs, d1-direct is Roon-ready.

Optionally, you can ask the manufacturer to send you DAC with DSD support (+$400), to replace the RCA input with BNC input, or to add the bass boost feature (+20% of the price). Finally, if you want an integrated streamer, you just have to ask the manufacturer and they will install the streamer board (+ $1,500).

As mentioned previously, d1-direct comes with a remote. The remote, unlike the unit itself, looks kind of cheap for such a high-end device. It is very easy to use and responsive but still feels too cheap. 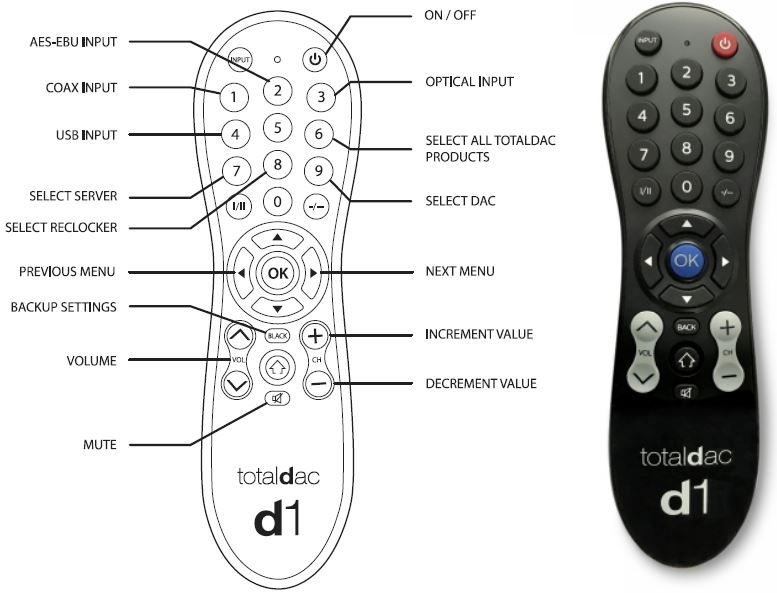 For the purpose of our testing, we used the AURALIC ARIES G2.1 streamer and server (connected via AES/EBU) as well as our MacBook Pro running on Roon (connected via USB). D1-direct fed the signal to the d1-driver (via RCA), and then to the PS Audio’s BHK Signature Preamplifier (XLR). The preamp was connected to two PS Audio’s BHK 250 monoblocks (XLR). Sonus Faber Olympica Nova V and Focal’s Sopra No3 were alternatively connected to the monoblocks. The speaker cables and interconnects, as always, were from the Nordost Heimdal 2 line. We used our large audio library and played all kinds of audio files (including lossless FLAC, WAV, and ALAC) stored on an external SSD storage connected to the AURALIC ARIES G2.1 via HDD USB port. We also used Tidal to stream high-res audio.

In all the possible setups and with all the sources, all music files, and all the possible genres from classical to RNB and EDM, Totaldac d1-direct paired with d1-driver (and even without the d1-driver), provided the same level of performance. And it was the kind of performance, accuracy, and transparency that borders and even surpasses the performance of much more expensive DACs. It’s a true audiophile material.

From the first minute, even without any burn-in time, d1-direct provided us with dynamic, natural, and vivid sonic performance. It translated every single bit of digital audio content into analog waves so effortlessly and without losing any detail in the process. It dazzled us with its sonic purity and ability to do its job without leaving any signature or any trace of its presence.

Totaldac d1-direct is arguably the best high-end audiophile-grade DAC in its price range (under $20,000). We were amazed by its sonic capabilities and its purity and transparency. This R2R DAC truly leaves nothing to be desired. Totaldac and its founder Vincent Brient, once again, did an amazing job. Bravo!