Audio equipment has an important place in our lives. This can be easily proven if you look at the offer at a local audio store and the fact that every one of us has at least one speaker at home, at work, in a car, etc. Basically, we are no longer satisfied by playing the music directly from our phones or players but we connect them to different kinds of wired or wireless speakers because they offer better performance.

This rule can also be applied to TVs. We all know that regular TV speakers, even the most expensive ones, aren’t as good as average home speakers, especially soundbars or home theater speaker systems. This is the most important reason why people decide to spend their money on expensive audio systems, especially if they are moving to a bigger apartment or house and their small TV speakers can’t possibly deliver the type of sound they need.

Once they start their search for the perfect audio system, they encounter many unexpected problems and understanding unknown terminology is one of them. One of their expectations is surround sound cinema-like experience but in order to get that, they need to understand its meaning and learn which equipment to buy, how to install it, and how to match it with the existing devices.

In this article, we are going to explain what surround sound is, list and explain all the existing surround sound formats, tell you how they work and what kind of equipment you need in order to get the expected effect. So, let’s start from the basics.

What is Surround Sound?

Surround sound is not a new audio technique. It was invented in order to create the effect of a sound that surrounds the listener. The effect is achieved by the specific placement of multiple speakers/channels in a speaker system, while the speaker number vary depending on the system type.

The true surround sound effect is achieved through the home theater speaker systems that consist of several speakers/loudspeakers and subwoofer(s) that surround the listener sitting in his “sweet spot” while the sound comes from different directions and creates the cinema-like experience.

What is Virtual Surround Sound? 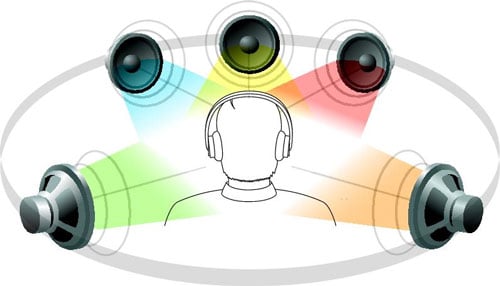 By their configuration, home theater speaker systems are divided into two main groups, – X.Y systems and X.Y.Z systems. Each of these basic systems has their subcategories that we are also going to talk about.

This is currently the most common home theater configuration format on the market. It is much simpler than other formats and it’s easier to install. The first letter refers to the number of speakers and the second one to the number of subwoofers in the system. Basically, you can have one or two subwoofers in the system but the number of speakers can vary a lot. In order to be considered a home theater system that delivers true surround sound, any speaker system shall have at least 5 speakers. Bigger systems can consist of 6, 7, 9 or even 11 speakers. Here is the basic information about the most common ones.

5.1 configuration is the least expensive and the simplest to install. These systems consist of 5 speakers and one subwoofer. In case you have two subwoofers, it will be a 5.2 system. The center speaker shall be in front of the listener, while the front left and front right speakers shall be placed on the right and left side of the center speaker. The subwoofer shall also be placed in front of the listener. The placement of the subwoofer is not as important as the placement of other speakers because the human ear can’t really define the angle and the side where the low tones come from. The two remaining speakers are side (surround) speakers and they shall be placed on the listener’s left and right side.

7.1 is slightly more complicated and also more expensive system because it consists of at least one subwoofer and 7 speakers placed in a way similar to the previous system placement with a few additions. The two remaining speakers are placed behind the listener at 45 or 60-degree angle and they are called surround back (rear) left speaker (SRL/SBL) and surround back (rear) right speaker (SRR/SBR).

9.1 is one of the largest speaker systems that you can buy and make work decently with available equipment. If you decide to buy this system, you have to count on two additional speakers that are added to the previously mentioned seven speakers. The main difference is that 9.1 system has two more front speakers but you get to choose between two types, height or width speakers.  In the first case, you have front left height (FLH) and front right height (FRH) speakers that are usually hung on the wall in front of the listener at 45-degree angle from the ‘’sweet spot’’ while in the second case you have FLW (front left width) and FRW (front right width) speakers that stand between two front and two surround speakers.

In case those previously mentioned formats don’t satisfy you and you have enough time, patience, space, and money, you can buy more complex X.Y.Z speaker system. 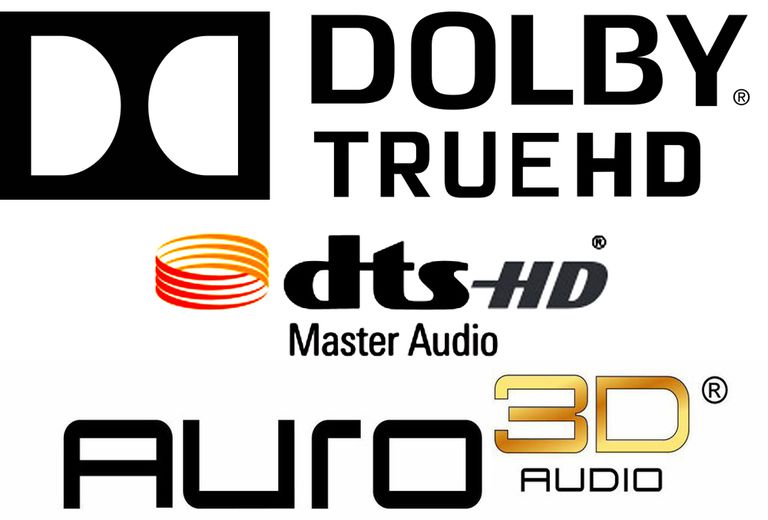 LPCM is the basic lossless surround sound audio format (not compressed) and every audio track is recorded in this format. You won’t find a receiver or a Blue-ray player that doesn’t support this format. They all support this one and choose if and which additional format they will use. LPCM supports 8 channels maximum and it will work fine with 7.1 system but it performs best when used with 5.1 systems. LPCM can be transmitted via any HDMI cable but if you decide to use other types of cable, you should be aware that the signal will be turned into two-channel audio.

Dolby Digital was invented in 1992 and it is also one of the mandatory formats supported by all kinds of AV receivers and Blue-ray players. However, it is not lossless (it’s lossy format), which means it is compressed, which also leads to partial information loss. This format supports 6 channels max, and it works best with 5.1 systems. Dolby Digital can be transmitted via HDMI connection as well as optical/coaxial.

DTS is currently the only Dolby’s competitor and rival. It appeared in 1993 and it is also mandatory lossy format, just like Dolby Digital. It also supports 6 channels max so it is recommendable to use it with 5.1 speaker systems. As far as sound quality is concerned, these two are practically at the same level. DTS supports the same types of connection as Dolby Digital.

This format first appeared in 2004. It is one of the lossy formats, it supports maximum 8-channel systems and in order to get the expected sound quality, you will have to use at least HDMI 1.3 cable. Not all receivers and players support it but it definitely offers better audio quality than the original Dolby Digital format (higher bitrate).

It was first used in 2004-2005 and it is also optional lossy audio format. It offers high-resolution audio quality and it can’t be used with systems that have more than 8 channels. DTS HD is at the same level as Dolby Digital Plus in terms of audio quality and just like DD plus, it doesn’t support any connection weaker than HDMI 1.3.

Approximately at the same time when DTS HD appeared, Dolby came up with Dolby True HD. It also supports up to 8 channels and minimum HDMI 1.3 connection but it is the high-resolution lossless format that offers very precise audio reproduction and great cinema-like experience.

DTS HD appeared in 2004 as one more lossless optional format that shows its best when used with maximum 8-channel systems. It also offers audio quality that is equal to the original studio recording and in order to achieve this audio effect, you will need to use at least HDMI 1.3 cable.

When it comes to Dolby Atmos, we can sincerely say that this format has started a true audio revolution back in 2012. It is the optional lossless audio format that supports up to 34 channels and it requires minimum HDMI 1.4 cable. Receivers that support Dolby Atmos decoding require minimum 7 channels to reproduce Dolby Atmos audio track, which means that it is not enough to have 5.1 speaker system to achieve the expected sound quality. You will need at least two additional speakers and it should be two height speakers.

DTS:X appeared later (in 2015) and it’s the greatest rival of Dolby Atmos. It is lossless, it supports up to 13 channels and it requires minimum HDMI 1.4 cable in order to reproduce DTS:X audio. However, it doesn’t require the use of height speakers and it works normally with regular 5.1 or 7.1 home theater systems.