When people are searching for a new pair of headphones, they usually spend a lot of time reading their characteristics and specifications but the truth is they pay more attention to physical characteristics, battery life, Bluetooth version, etc. The part where frequency response, sensitivity, and impedance are listed are often skipped and neglected but these are very important features that affect headphone performance and sound quality.

If you don’t know how your headphones work, you won’t be able to use them and maintain properly, and this is often one of the reasons why people are complaining about their headphones performance. We have run into this problem so many times that we have decided to write this article and explain headphone impedance in detail. If you understand what impedance is and why it is important for your device, you will use your headphones correctly and be more satisfied with their sound.

The term impedance was used for the first time at the end of the 19th century and, by definition, it is the measure of the opposition of a circuit when current is going through an electrical device. Impedance is marked with Z and it is measured in Ohms. It is also equal to zero when the voltage and current are constant (direct current) but it can never be equal to zero when alternating current runs through the device.

Impedance actually describes the relationship that exists between voltage and current in a circuit that consists of capacitors, inductors, and resistors.

Impedance and resistance are commonly confused terms and one of the reasons may be the fact that they are both measured in Ohms. However, these two terms don’t have the same meaning and they most certainly don’t relate to the same thing. 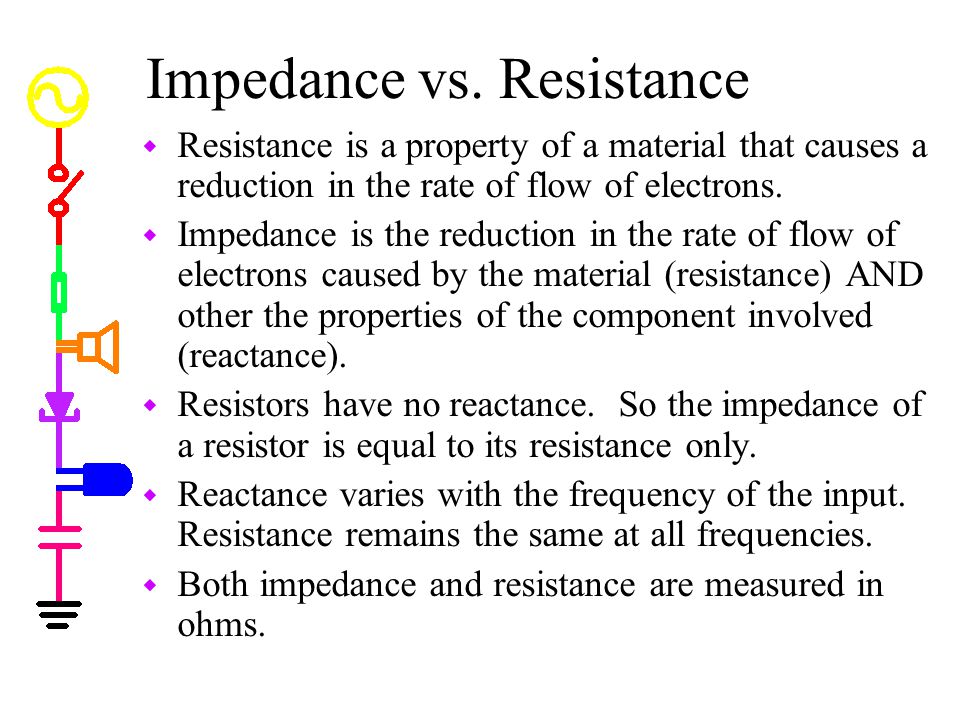 Impedance is a real vector with two dimensions. It consists of two phenomena – resistance and reactance, which means resistance can never be equal to impedance because resistance is contained in impedance, which has both magnitude and phase.

Resistance, on the other hand, is an imaginary vector that has only magnitude. It enables us to measure the opposition of electron movement among atoms in a substance. As atoms accept electrons, the resistance becomes lower.

When alternating current is running through a system (device), its sinusoidal wave is always generated at a certain frequency. This affects electrical components of the device, making their resistances vary along the power source frequency. This is why we can say that impedance is the voltage and current frequency domain ratio.

When direct current is running through the device, we can’t establish a difference between impedance and resistance because of relating sinusoidal voltages and currents by linear law.

What is Headphone Impedance?

Based on what we have previously said about impedance in general, we can say that headphone impedance is the measure of the opposition of the headphones to the audio source signal. It is also expressed in Ohms and it is one of the characteristics included in the specification list that is often being neglected.

However, impedance is extremely important for anybody who cares about sound quality. Headphones can be divided into two categories based on their impedance (low and high-impedance headphones) and depending on the group your headphones belong to, you have to use them differently.

When we say this, we think about devices the headphones are connected to, which are the power and audio sources. If you use your headphones with an appropriate device, you will achieve maximum sound quality, including maximum loudness.

Why is Important to Know Headphone Impedance?

Low-impedance headphones (16, 18, 32, 40 Ohms, etc.) are the most common on the market. Actually, most of the portable headphones (on-ear, over-ear headphones, earbuds, in-ear headphones) belong to this group and it is the consequence of their purpose. They are made to be used “on the go” while connected to portable electrical devices that are used as audio and power sources (smartphones, tablets, players, etc.). As you can see, these devices are battery-powered devices, which means they can’t supply your headphones with a lot of power. This is why we use them with low-impedance headphones that don’t require a powerful source to drive them.

In case you really want headphones that will be able to perform at least decently with both types of sources, you can get, for example, 32-Ohm version. These can be driven with both battery-powered devices and amplifiers. They won’t show their best in both situations but they will most certainly sound better than 16-Ohm headphones with an amplifier or 600-Ohm headphones with a smartphone.

Impedance mismatch can’t destroy your headphones or the audio source but it is definitely very important to obey the basic rules of impedance matching for better performance. When you use a battery-powered device with low-impedance headphones, for example, a player with a 3-5-volt battery, the signal voltage is low at the output and these two devices are able to create high current and the headphones will deliver great sound. On the other hand, if you connect low-impedance headphones to a powerful amplifier, you risk blowing them out because they have a low threshold limit. Also, if you plug high-impedance headphones to a battery-powered device, they won’t be able to create high current. The voltage will also be lower and all of this will lead to very poor sound quality and low headphone volume.

Which Headphones are Better Choice?

Thicker coils have fewer layers of wire, which makes them so easy to make. This is one of the reasons why they are more available and much cheaper. Thinner coils have more windings and smaller diameter that allows less air to go between the layers, making the wires tighter and electromagnetic field more powerful. Generally, this kind of voice coil decreases the risk of sound being distorted, which will make the high-impedance headphones better. To be honest with you, they do sound clearer and more natural, while their bass is more present and nicely defined. Also, the high-impedance headphones’ soundstage is wider than the soundstage of low-impedance headphones.

However, no matter what their build and way of manufacturing tells us, we still claim that it is more important to match the impedance correctly than simply buy a new and expensive pair of high-impedance headphones. If you decide to do it, we advise you to check some of the high-impedance models made by Beyerdynamic or Sennheiser. Beyerdynamic makes headphone models with different impedance values, so you might even be able to find a good compromise between high and low-impedance headphones at a reasonable price.