If you’re reading this, you are probably interested in setting up a new or upgrading your old surround sound speaker system. These systems have been very popular during the last two decades and the number of their users is increasing every day. If you have read about these speakers before or you’ve heard them, you are probably not wondering why they are so popular.

Surround sound systems consist of at least five speakers and at least one subwoofer. (Of course, you can get a smaller system with less speaker that imitate surround sound very well but that doesn’t mean the final result will be good as expected.) Those 5.1 systems are actually the most popular option but those who have big houses usually want to equip it properly and they buy larger systems – 7.1, 7.2 or even 9.2.4 (4 stands for height speakers). However, most people think that the 5.1 system offers everything you could expect from a home theater system.

How Does a Surround Sound Speaker System Work?

Let’s say you have a 5.1 speaker system. Three of the five speakers are placed in front of the listener and most of us call them front speakers. These are the Front Left, Center and the Front Right speakers. The two remaining speakers are placed on each side of your “sweet spot” (your sitting position) and they are called Surround Right and Surround Left speaker. The .1 is your subwoofer. By adding Surround Back Left and Right speakers, you get a 7.1, and by adding one more subwoofer 7.2 system. Adding height or ceiling speakers is also one of the options but you can read more on these topics in some of our other articles.

Apart from deciding how many speakers you want or need in your house or apartment, you have to decide which type of speakers you want. Generally, the front speakers and subwoofer(s) play the most important role in the system as they do most of the work. Once you make sure you have a great set of front speakers and a great subwoofer, you can be more relaxed about getting the surround speakers where you can choose between three types: direct-radiating speakers (also called monopoles), bipole and dipole speakers. Each of them performs in a different way and delivers different results but the monopoles are the simplest and the most common type. Bipoles and dipoles are a bit confusing terms for ordinary customers so let’s introduce them to you and help you find the best option for your home.

The Main Difference Between Bipole and Dipole Speakers

As direct-radiating (monopole) speakers aren’t exactly our theme, we won’t be concentrating on them but they are definitely worth mentioning as they can help you to understand the other two types. 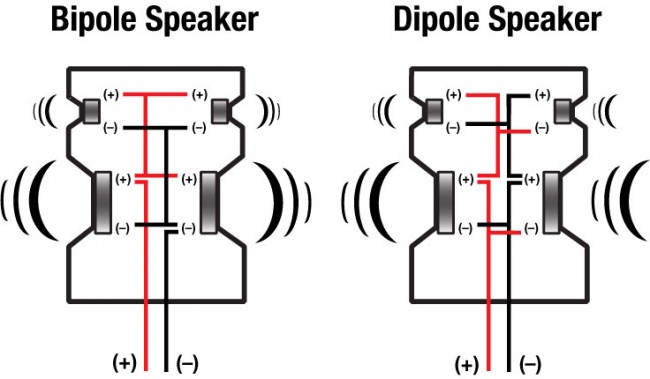 Direct-radiating speakers are adored by most of the audiophiles and generally, most of the users. These speakers manage to do the best job reproducing surround sound effects in video games and action movies. They usually have the same drivers as the front speakers. These drivers aim the sound directly towards the listener sitting at his “sweet spot”. In this case, especially if all the speakers in the system are placed at the equal distance from the listener, the effect will be amazing and the listener will be thrilled. These speakers are also doing great in large rooms (over 5000 m3). However, if you move a bit from the perfect listening position, you risk destroying the listening experience because the audio may sound too quiet.

Bipole (bi-polar, bipole) or bidirectional in-phase speakers can be used as both front and surround speakers in a system. If compared to the previously mentioned monopole speakers, the bipole ones use two instead of one driver and when compared to dipole speakers (that are the next type on our list), the drivers of the bipole speakers are in phase with each other instead of being in different phases, which is the case with dipole drivers. The point is – with a bipole speaker, the sound will come out from two sides of the enclosure and be fired in different directions but both drivers will perform simultaneously as they are “in phase”. When you use these speakers as side-surround, the sound will go towards the front and the rear part of the room. On the other hand, when the speakers are used rear-surround speakers, both of the drivers will fire the sound towards the front side of the room.

Bipole speakers are great for situations when many friends come to your place to watch a movie because these speakers are great with a larger audience. This is because they diffuse the sound in a way that a part of it goes towards the “sweet spot” but that the rest is diffused all over the room. This also makes these speakers and the sound coming out of them quite difficult to localize. As the sound is not pointed directly towards the listening position, the annoying ‘’hotspotting’’ can be easily avoided. Bipole speakers are actually great if you’re listening to music most of the time or you can’t find the right placement for all the parts of your home theater system. Usually, you can achieve the best results by placing the bipole speakers on a rear wall. Also, you can place them directly in front of the listening position or to its sides and you won’t regret it.

Dipole (di-polar, di-pole) or bidirectional out-of-phase speakers are similar to the bipole speakers because they also have two drivers in one cabinet. The difference, though, is that the drivers of the dipole speakers aren’t in phase. In fact, one driver is firing out sound to the front and the other to the rear side of the room while the two arrays aren’t in phase with each other. Shortly, they work in a way that enables one speaker (driver) to output sound while the other one is not, and vice-versa. The interesting thing is that two drivers don’t have to be installed on opposite sides of the cabinet in order to work in the described way. The speakers with their drivers on the opposite sides of the cabinet, placed under the 90-degree angle, which aren’t in phase with each other, are still considered dipole speakers, at least when it comes to surround sound speakers.

The rear array is 180-degrees out of phase with the front array and this is the reason why null is created on-axis and why the audio level of these speakers drops by 8-12 dB on average. This cancellation and audio level drop mean that these speakers have one significant problem and that is poor bass performance. When two arrays aren’t in phase with each other, they cancel the bass. The manufacturers are trying to solve this issue in different ways. Those who decide not to ignore the problem usually roll off the bass in one of the drivers while the others decide to use one woofer and a pair of tweeters and leave the tweeters out of phase. We can’t say that either way is great and this is the reason why these speakers are usually avoided unless they are absolutely necessary.

However, dipole speakers are an excellent choice when you want to place your home theater system in a small room or when the audience is numerous because these speakers do a great job dispersing the sound all over the room leaving almost no chance for the sound to be localized, too focused or too aimed towards the “sweet spot”. This happens because two drivers that fire out the sound, are out of phase with each other and they cancel the sound in the center, creating a null. So, when you place your listening position in this center, it means that the “sweet spot” is where the null is and that the sound is dispersed instead of being localized.

In spite of all their issues and disadvantages, dipole speakers aren’t completely bad for you. They were invented and created in order to make monophonic music from old vinyl sound warmer and diffused and they can really make the music sound livelier, especially in smaller rooms with a large audience. They do the best job when placed properly because they manage to balance the audio output so that it sounds the same in every part of the room.

How to Choose the Perfect Speaker?

We have talked so many times about finding the perfect speaker and optimizing its performance and we have always come to the same conclusion – the best way to find the perfect speaker or speaker system and optimize its performance is to experiment with speaker types and their placement in a room. If you have read some of our articles, you have probably realized that a speaker performance depends a lot on the room acoustics and speaker placement. As bipole and dipole speakers are also speakers, there is no reason not to apply the same rule on their placement. 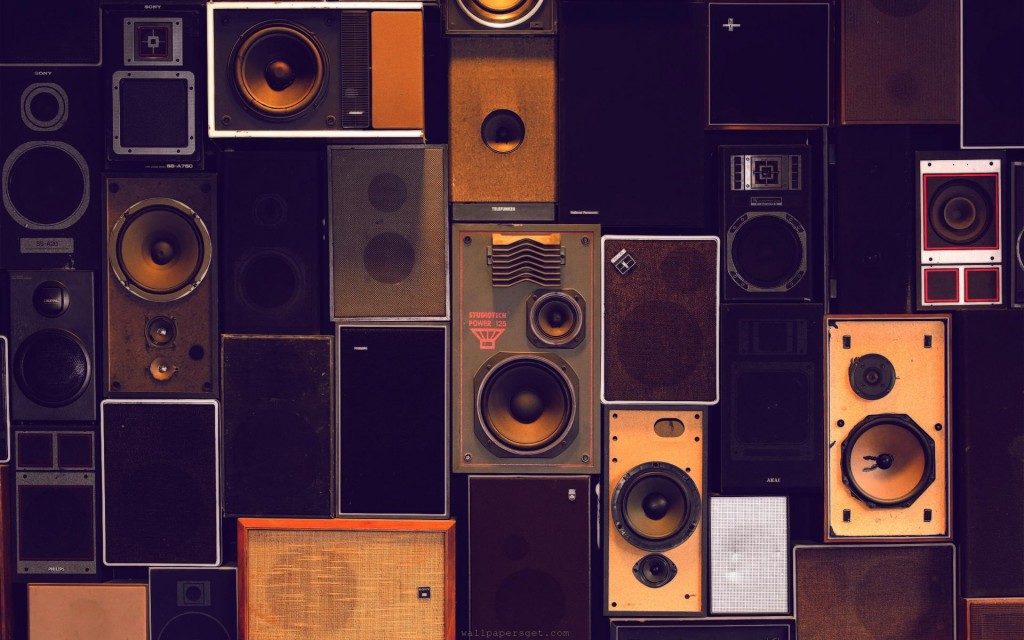 One more thing that you should pay attention to is localization. It actually refers to the situation when the listeners who sit on the sides of your room can hear high frequencies. In order to reduce the effect, the simplest thing to do is to roll off the highs, turn down the side surround speakers or simply place them higher than usual.

In the end, we just want to remind you once again of what we have mentioned in the text above. Monopole speakers are preferred option when you are the only listener because all the sound effects will be pointed directly at you. You can also use them in very large rooms without special acoustic treatment. On the other hand, bipole speakers act better in larger rooms while dipole speakers show their best side in smaller rooms crowded with people.