Speakers might look complicated but they are actually really simple devices and in order to understand their working principle, you need just a basic understanding of electromagnetism and sound waves.

Speakers transform electrical signals into sound waves and that’s the simplest definition of their purpose. The working principle is a little bit more complicated but we will get to that.

Parts of A Speaker

Every speaker has at least three parts – enclosure, driver (or drivers), and electronic components (crossovers, amplifiers).

Enclosure/Housing/Cabinet – The box inside which all the drivers and other components are installed is called enclosure. Depending on the type and size of the enclosure, the sound will be different.

Electronic components (crossovers and amplifiers) – Many speakers have amplifiers. Their purpose is to amplify the electrical signal and improve the accuracy of the output signal. Some speakers (those with two, three, or multiple drivers) have crossovers which redirect signals of different frequencies to dedicated drivers (woofers, midrange woofers, tweeters).

Driver is the part of the speaker that actually transforms all the electrical signals into sound. It consists of several parts that are glued together.

At the bottom of the driver, there’s a rear (bottom) plate and a pole piece (they are made of metal). A ring-shaped permanent magnet is placed onto the bottom plate and then glued to the top (front) plate. The voice coil windings are held by the voice coil former which fits the pole piece. Two ends of the voice coil are attached to the solder terminal (which is located somewhere on the frame). The amp is also connected to the solder terminal. When the electrical signal from the amp (alternating current) is fed to the coil, the coil becomes an electromagnet and reacts with that ring-shaped permanent magnet. This basically means that the voice coil moves back and forth depending on the orientation of the poles (electromagnet changes the orientation of the poles if the current flow is reversed). The electrical signal fed to the coil constantly changes the flow of the current causing the voice coil to move. 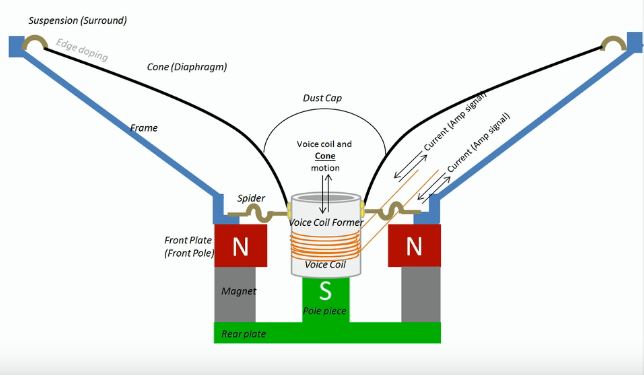 The metal frame (basket) is glued to the top plate and it holds the speaker cone (diaphragm).

The dust cap covers and protects the voice coil and internal parts of the speaker. 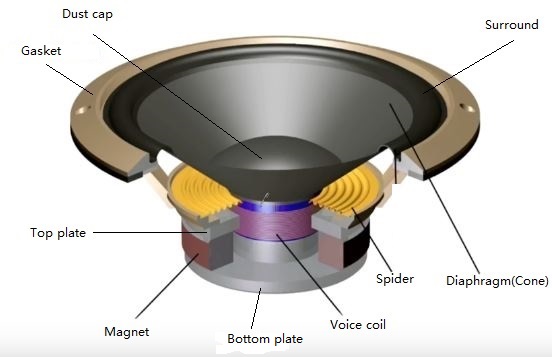 When the electrical signal from the amp (current) is fed into the coil, the coil moves back and forth and along with the coil, the diaphragm (cone or dome) moves since it’s glued to it. The diaphragm basically gets pushed and pulled by the voice coil. The diaphragm pushes and pulls the air in front of it and creates soundwaves (sound pressure waves). These waves come to our eardrums and cause them to vibrate. The eardrum vibrations are sent to our brain as electrical signals and then interpreted as sound.

Now, let’s think about the last two sentences. Is it possible for one driver to produce all the audible frequencies (20Hz to 20kHz) equally well? Larger drivers have larger cones which means they are heavier and harder to move/vibrate – they are not good enough when it comes to high-frequency reproduction since they cannot move fast. On the other hand, small driver cones can vibrate at a greater rate (they can move faster) but aren’t good enough for low-frequency reproduction (it’s difficult to make them vibrate at slow rates). That’s why many manufacturers make speakers with multiple drivers – each driver is in charge of reproducing a certain range of frequencies.

Based on the size, the drivers can be divided into 3 groups:

Woofers – The largest drivers (usually larger than 5 inches). They are in charge of low frequencies.

Midrange drivers (midrange woofers or midwoofers) – Smaller than woofers but larger than tweeters (usually 3-5 inches). They are in charge of midrange frequencies.

Tweeters – The smallest drivers (usually 1-inch drivers or even smaller). They are in charge of high frequencies. 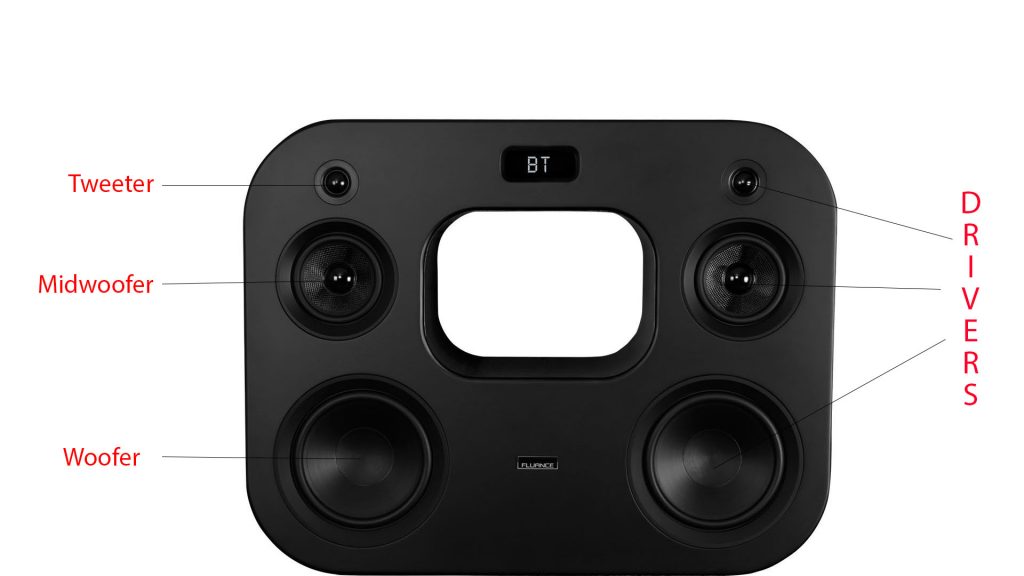 The Importance of The Crossover

In order for different drivers (woofers, midrange woofers, and tweeters) to work together you need a device that would break the input signal into two or three smaller output signals (low, mid, and high-frequency signals) and send them to appropriate drivers. These devices are called crossovers.

You might think that a 3-way speaker should always sound better and more accurate than a 2-way speaker but that’s not the case. 2 drivers are sometimes better than 3 drivers. The sound quality depends on many factors – the quality of the installed components inside the crossover, the crossover setup, quality and type of the enclosure, etc.

Based on the power source, all the crossovers are divided into two groups – active and passive. Passive crossovers are more common and you can find them in many speakers. They are powered by the input signal and they are built inside the speakers. Active crossovers need an external power source but they give you more freedom when it comes to fine-tuning and adjusting the sound (but they are much more expensive and more difficult to install).

The Importance of The Enclosure

The third part of a speaker is the enclosure. This is the box (made of wood, MDF, plastic, or some other material) that holds the drivers and other electronic components. The sound would exist even without the enclosure but there are a few reasons for using it. The first reason is the most basic one – it’s more convenient to install everything inside one compact box. The enclosure is also very important for sound quality. It is supposed to eliminate the driver vibrations and handle the air (sound) that gets pushed behind the driver cone (diaphragm). The diaphragm vibrates due to the movement of the voice coil – it pushes the air toward our ears but it also pushes it back toward the enclosure (it moves back and forth). Different types of enclosures handle this air (or soundwaves, if you want) in different ways.

There are two basic types of enclosures – sealed and ported. Sealed (aka acoustic suspension) enclosures are more common. They have no holes for the air to ‘’escape’’ so the air that gets pushed back is trapped inside of the enclosure. The air gets piled up behind the cone and because of all the air, it’s much harder for the diaphragm to move back and forth. That’s why these speakers are less efficient and the electrical signal has to be boosted. Sealed enclosures make the sound more accurate but the bass is tighter and controlled.

Ported enclosures have holes (usually on the rear or on the front panel). These holes are known as ports (bass reflex ports) and they allow the air to ‘’escape’’ the box. The speakers with ported enclosures are louder, more efficient, and easier to drive but they don’t produce equally accurate sound as speakers with sealed enclosures.

Enclosures with a passive radiator(s) are somewhere in between the previous two types. They have ports but inside these ports, there are passive drivers (they don’t have voice coils and are not connected to the amplifier). These passive drivers (passive radiators) vibrate when the sound waves are created by the active drivers. Passive bass radiators combine the benefits of sealed and bass-reflex enclosures – the speakers with passive bass radiators produce more accurate sound than the bass-reflex speakers and they are more efficient than the sealed speakers.