Every browser lists an infinite number of results whenever the keywords “speaker sound quality” are entered. Everyone wants the best product for as little money as possible and we are all trying to find the easiest way to reach that goal. Even though there are so many discussions about speaker sound quality on the Internet, there is one question that arises here – can you actually measure the sound quality of a certain speaker and how can you do that?

Every audio device has its sound signature and that’s what makes it unique. Sound signatures can be described by the listeners and the description usually includes the analysis of the low, mid, and high tones. However, if you don’t feel confident doing it, you can always flip the speaker box and read the specifications on the backside of the packaging.

These specifications are there to help the customers understand what they are buying even before they actually buy the speaker. However, these specs lists can also confuse many ordinary buyers. The specs consist of a bunch of abbreviations, numbers, and even strange and unknown units of measure that confuse people even more. So, what do they do? Most of them simply buy the product based on superficial impressions. They usually base their decisions on the design and initial sound impressions. The price range is also one of the important factors that affect people’s decisions.

Due to all these reasons, we are determined to help our readers avoid this problem the next time they decide to buy a great speaker. That’s why we’ve made this article. Hopefully, it will help you learn a few things about speaker features, understand them better, and make better choices in the future.

Before we proceed to the most important part, we want to point out one important thing. No matter how well you learn the lesson about speaker features, you must never forget one fact – every person makes the final decision based on his/her personal taste. This is why two listeners with different tastes can describe the bass produced by the same speaker as deep, amazing, punchy, as well as overwhelming and boosted. Also, you shouldn’t forget that the same speaker sounds different when placed in different rooms.

Comparing and analyzing all the specs and other factors is quite difficult. This can be a nightmare for an average user, especially if he/she has no previous knowledge about speakers’ specs. But don’t worry – we will try to explain all the important things in layman’s terms. So, let’s move now onto the main topic.

Best way to measure the sound quality of the speaker

To measure sound quality, manufacturers use a standard test for installing a microphone linked to a decibel meter. One meter in front of a speaker and measuring the sound pressure level output, in decibels, with one watt of power given into the speaker.

Speaker output power represents the amount of power that a speaker can receive from the source of power without being damaged in any way. It is commonly expressed in watts (W) but you should be aware that different manufacturers show this information using different abbreviations. Usually, you can find RMS and peak power information on the backside of your device packaging. RMS stands for Root Mean Square and it represents the continuous power or the power that a speaker can receive over a longer period of time without being damaged. Peak power represents the maximum amount of power that a speaker can receive in a moment (in a short burst), also without getting damaged. RMS value is always more practical and more useful but the best option is to have both values listed. The problem arises when it’s not specified if power output values represent RMS or peak power. In these cases, you can assume that the given values are peak power outputs.

One thing is for sure – the higher the RMS value, the louder and more powerful your speaker will be. Speaker loudness is very important for every buyer and it is expressed in decibels (dB). The higher the number of decibels, the louder the speaker gets. It goes without saying but you should be very careful with loud music since it can lead to hearing damage and noise-induced hearing loss. Remember this: when the decibel level is increased by 10dBs, the actual speaker loudness doubles, which means that a small change in numeric values can easily have an enormous impact on your hearing and health.

Speaker frequency response represents the range of frequencies that a specific speaker can produce and it is expressed in hertz (Hz). Every speaker should be able to produce all the frequencies within the 20Hz-20kHz range because this is the spectrum of frequencies audible to the human ear. Most speakers manage to complete this task but some of them go seriously below and above the usual limits. Regardless of the fact that a human ear can’t hear those frequencies (except audiophiles, who just claim they can), the ability to produce frequencies lower than 20Hz and higher than 20kHz is considered prestigious. It is also seriously charged.

The good news is that the speaker frequency response can be measured accurately. Unfortunately, not every person can do it because the measurements are done in a special anechoic chamber. The speaker is fed with audio signals and a microphone is used to record the results that shall later be analyzed. The results are usually presented in the form of a curve called frequency response curve. 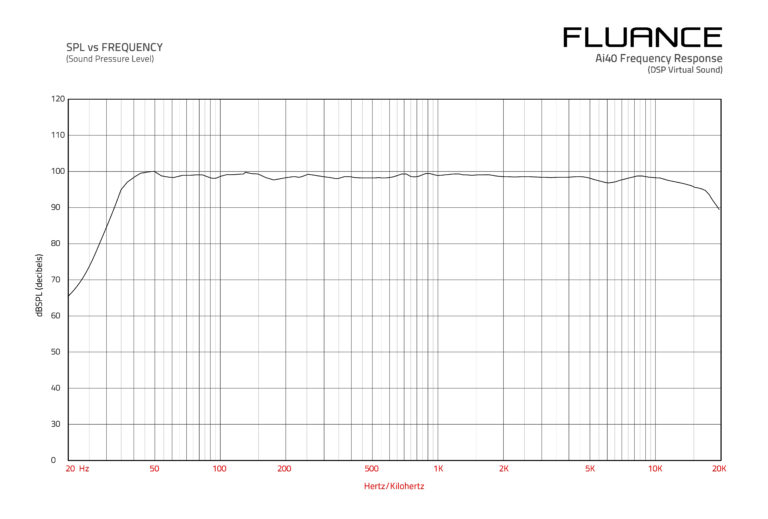 Of course, you can always try to get a PC-based system that completes such measurements based on measuring speaker impulse response. Sadly, these measurements are not as accurate as the measurements performed in an anechoic room.

The signal-to-noise ratio represents the correlation between the speaker sound quality and background noise and it’s expressed in decibels (dB). In other words, this is the ratio of signal levels to the background noise.

When you turn your speaker on, certain audio signals are sent to it. The driver units convert these signals to sound waves that we can hear and recognize. However, this sound comes with a certain amount of noise made by the internal components. Subsequently, SNR is there to show you the level of noise that comes along with the audio signal.

For example, if you get a speaker with 100dB of SNR, it means that the audio signal level is 100 dB higher than the background noise level. As you can conclude, the higher the SNR, the cleaner the sound.

Total harmonic distortion is used to measure the distortion level of the original audio signal received by the speaker from the source device (phone, player, etc.). In the specs list, it can be marked as THD and it’s expressed as a percentage (%). Harmonic distortion is caused by the driver’s imperfections and nobody has actually found a way to avoid or completely eliminate it because all the existing drivers have certain imperfections.

Loudspeaker’s total harmonic distortion can be lower than .01% but it can also be higher than 1%. In some cases, when the THD is too high, the manufacturers choose not to put it in the specs list. However, this information is very important because it can show you how distorted (or rather how accurate and clean) the sound will be.

Speaker sensitivity is the measure of a speaker’s ability to convert an incoming electrical signal into sound waves. It is expressed in decibels of sound pressure level per milliwatt (SPL/mW) and it seriously affects the speaker’s loudness.

Sensitivity is measurable and the measuring can be done in a non-echoic environment or in a room. The measurement results are slightly different. The results in a room can be slightly higher than the results in a non-echoing environment. They have one thing in common – the higher the sensitivity value, the louder your speaker will be. An average speaker has approximately 88dBs sensitivity but everything over 90 is considered very loud.

Just like sensitivity, impedance also affects speaker loudness. It is expressed in Ohms (Ω) and it represents the speaker’s resistance to the electric current. This is the reason many people use the word “resistance” instead of impedance.

The impedance values usually span from 4 to 8Ω. It may seem low but you should know that neither too low or too high impedance values are good for the speaker and accompanying equipment. For example, if the impedance is too low, it will require more current than your amp has to offer. The amp will constantly be overpowered, which may lead to damage.

When reading speaker reviews (ours or someone else’s), you will notice that there’s not much talk about the measurable characteristics (impedance, sensitivity, frequency response, power output, THD, etc.). These specs are usually mentioned but the majority of reviewers (including our reviewers) prefer to talk about the bass response, midrange clarity, treble response, vocals, stereo separation, imaging, soundstage, and other non-measurable characteristics. These observations and comments are usually affected by the reviewer’s taste and preferences.

Even though there’s a more accurate way of describing the sound reproduction through the frequency response curve, the reviewers prefer describing the bass, midrange, and treble response in their own words. These observations can be a bit subjective but they can still give you a good idea of what to expect when it comes to lows, mids, and highs.

Combined, these two things are supposed to describe the ability of a certain speaker (or a speaker system) to create a realistic 3D space around you and to precisely position individual sounds within that space.

The term soundstage describes the virtual stage, created in the reviewer’s mind while listening to music with his eyes closed. His perception of the width, height, and depth of the virtual stage is what a reviewer defines as good/wide/spacious or narrow/small soundstage.

Imaging represents the ability of a certain speaker (or a speaker system) to position individual sounds within the soundstage. If you can tell where each sound is coming from or where each musician or singer is standing, the imaging is good or precise.