But do you really know how waterproof or water-resistant the device you want to buy is? Do you understand the meaning of those IPX codes that are supposed to tell you the level of protection against water ingress?

Don’t worry if the answer is no – we are here to explain everything to you. The main topic of today’s article is IPX6 water-resistant rating.

The Purpose of IP Code/Rating?

The sole purpose of an IP code or IP rating is to describe the level of protection against the ingress of water and solid particles. IP is the abbreviation for International (or Ingress) Protection.

To get a certain IP or IPX code, a device has to pass a strictly defined test. These tests and all the conditions under which the tests are performed are defined by the IEC’s 60529 standard. If a device passes the test, it gets the rating. The general form of this rating is shown in the image below. 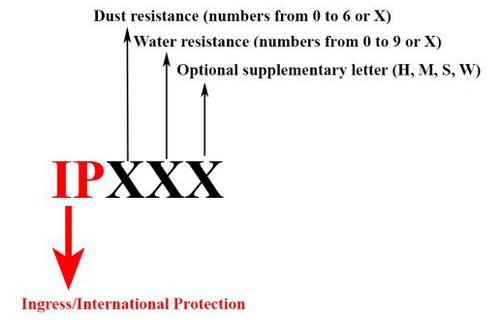 The abbreviation IP is usually followed by only two digits or one X and a digit. However, the max number of digits following the IP is 3.

The third symbol following the IP is an optional letter that describes different conditions and circumstances in which the test is done.

The Meaning of Various IPX Codes

Since the main topic of our article is waterproofness and water resistance, we won’t be dealing with dust protection and we won’t discuss the meaning of different levels of dust protection.

As mentioned in the introduction, there’s a specified test for each IPX rating. If the device passes the test, it gets certification for that rating.

IPX0 devices don’t have any protection against water ingress. Even a few drops of water can damage them.

IPX1 and IPX2 certification tests are usually called dripping tests (because of the dripping water). IPX1/IPX2 devices offer very modest protection against water ingress. In the case of IPX1, the tested device will stay functional if the waterdrops fall vertically on it for 10mins. The intensity of dripping water corresponds with light rain (1mm per min). In the case of IPX2, the intensity of dripping corresponds with moderate rain (3mm per min). The water is dripping vertically but the device is angled at 15-degree and the test is done in 4 positions (each test lasts 2.5min).

Certification for IPX3 and IPX4 is performed with the same equipment. An oscillating tube or a nozzle with a counterbalanced shield can be used for these two tests. For IPX3 certification, the device is sprayed with a nozzle for five minutes at various angles (0-60°). For IXP4 certification, the device is sprayed at all angles with the same nozzle but with the shield removed. The test also lasts 5mins. If an oscillating tube is used, the test duration is 10mins. If a device is IPX4-certified, it’s colloquially referred to as splash-proof.

An immersion tank is used for IPX7 and IPX8 certification. For both tests, the device has to remain fully functional after being submerged in water for a certain period of time. In the case of the IPX7 test, the water depth is 1 meter and the duration is 30 minutes. When it comes to IPX8, the conditions are not so firmly defined but have to be more severe than in the case of IPX7 (greater depth and longer duration).

One IPX rating you won’t find on devices you use every day is IPX9K. A device with an IPX9K rating will survive powerful high-temperature water jets. The test is similar to the test for IPX6 rating but the pressure and water temperature are much higher (8-10 MPa pressure, 176 °F temperature) and the distance between the nozzle and device is much shorter (0.1-0.15m).

How Resistant is a Device with an IPX6 Rating and What Can You Do with It?

As discussed, a device with an IPX6 water-resistant rating will stay functional when sprayed with a strong water jet at any angle from a 3m distance.

That being said, a device with an IPX6 rating can withstand light or moderate rain for longer periods (the exact time varies from device to device). Even heavy rain should not be a problem (for a much shorter period).

Even though sweat and water are not exactly the same thing, heavy sweating should not damage your IPX6-certified sports earbuds/headphones.

One of the most common questions regarding the IPX6 rating is – can I use my IPX6 speaker/headphones in the shower? Unfortunately, we can’t give you a straight answer. You see, theoretically, the shower pressure should not be a problem since your IPX6 speaker can withstand strong water jets (the shower is basically a pressurized water jet). Water temperature and steam, on the other hand, could cause some problems. All the IPX tests are performed with cold water (except for IPX9K) and no one can guarantee that your IPX6 water-resistant speaker is suitable for shower use. The only way to find out is to test it.

If you’re interested in our experience with various IPX5 and IPX6 water-resistant speakers, almost all these speakers will stay functional after a short-term shower use (a few days of use in the shower). However, long-term use and longer exposure to hot water and steam may result in corrosion of some internal metal parts and the speaker will eventually stop working. How long will it last? We honestly have no idea. Maybe a month or a few. Or even a year. There’s no guarantee. One thing you must not forget is to wipe your water-resistant Bluetooth speaker off after the shower and make sure it’s completely dry, especially before charging it.

The manufacturers use a variety of marketing gimmicks and all kinds of terms to describe the level of waterproofness or water-resistance of their speakers, headphones, earbuds, smartphones, etc. Some of the most common terms are splash-proof, sweat-resistant, water-resistant, waterproof, fully waterproof, airtight, weatherproof, rainproof, showerproof, sealed, water-tight, and many others.

So, what’s the meaning of all these terms, and should you trust all the claims? Well, unless these claims are supported by an IP/IPX rating, they are completely meaningless. IP code is the only internationally recognized confirmation of water resistance/waterproofness.

Another gimmick used by shady sellers to trick you into buying their ‘’waterproof’’ equipment is using the wrong form of an IPX code. If an IPX code is written in the wrong way (like with a hyphen or with a space between the X and a number), just assume that a device is not even tested. It could be an honest mistake, but it probably isn’t.

Q: What is the meaning of IPX6 waterproof rating mean?

A: An IPX6 device will stay fully functional when sprayed with strong water jets (15psi) at any angle, from a 3m distance for 1min. In practice, this means that a device can survive light, moderate, or even heavy rain for a certain period. It can also survive heavy sweating. Accidentally spilling a glass of water over it should not be a problem.

Q: Can you swim with IPX6 headphones/earbuds?

A: Technically speaking, IPX6 headphones or earbuds are suitable for swimming, but it’s probably smarter to get fully waterproof and fully dustproof headphones/earbuds (something with a rating IP67 or IP68 or at least IPX7/IPX8).

Q: What is the best IPX rating?

A: Only IPX7 and IPX8 ratings refer to devices that are fully submersible in water. An IPX7 device will stay functional after spending half an hour in one-meter deep water. IPX8 device can withstand even higher pressures (greater depths). Devices with IPX5 and IPX6 ratings are considered water-resistant and can survive water jets.

Q: What IP ratings are given to waterproof equipment?

A: A device with an IP66 rating is fully dustproof (resistant to dust ingress) and resistant to strong water jets. So, even though it’s not tested for rain, it is safe to assume that it is also rainproof.

A: Shower pressure should not be a problem but water temperature and steam could be. An IPX6 device will probably survive short-term shower use but we are not so sure about long-term use. We’ve discussed this question already and if you want a detailed explanation read the article.

Q: What is the highest waterproof rating?

A: Both ratings (IP65 and IP67) imply that a device is fully dustproof (that’s the meaning of the number 6).

If a device has an IP65 rating, it’s also water-resistant and can survive 1min of spraying from a 3m distance when the water pressure is 4.4psi or lower. However, IP65 devices are not submersible in water.

If a device has an IP67 rating, it’s waterproof and submersible in water of up to 1m depth for 30mins or less.